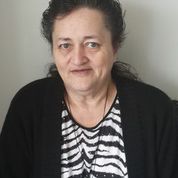 Poppy has lived and worked in Porirua for 20 years. For the past 15 years she has been involved with the Opportunity Centre in Cannons Creek, during which time she introduced numerous programmes for the benefit of youth in the community.

In 2010 Poppy received a Civic Award from the Porirua City Council acknowledging her work in the community, her contribution to the Cannons Creek Community has been longstanding.

She has previously been involved with teaching youth Te kanga Maori and has delivered workshops on the art of making the Korowai.

Poppy has been a Porirua Whanau Centre Board of Trustee for many years.

+ Text Size -
Do NOT follow this link or you will be banned from the server!